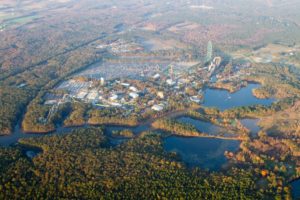 Jackson is the site of Six Flags Great Adventure, home to the 456-foot (139 m) Kingda Ka, which as of 2017 is the tallest roller coaster in the world.  Jackson is also home to Six Flags Hurricane Harbor and the 350-acre (140 ha) Safari Off Road Adventure, which replaced Six Flags Wild Safari in 2013.

Jackson Township was incorporated as a township by an act of the New Jersey Legislature on March 6, 1844, from portions of Dover Township (now Toms River Township), Freehold Township and Upper Freehold Township, while the area was still part of Monmouth County. It became part of the newly created Ocean County on February 15, 1850. Portions of the township were taken to form Plumsted Township on March 11, 1845.

For a quick search of the Central New Jersey area, click the button:

CR 527, CR 528, CR 547, CR 537, CR 526, and CR 571 pass through the township. CR 539 also passes through the township, but in the southwest corner, for less than half a mile. Interstate 195 is a major artery that travels through the northern section of Jackson (it just so happens that Jackson is the only municipality in Ocean County that hosts any interstate). While the expressway travels into Howell and Millstone Townships, it is also a vital link for Six Flags since it grants access to the Garden State Parkway, Interstate 295 and the New Jersey Turnpike (Interstate 95).

Academy Bus offers service to Port Authority New York and to Wall Street in Lower Manhattan, with a stop at the Brook Plaza on County Road 526.