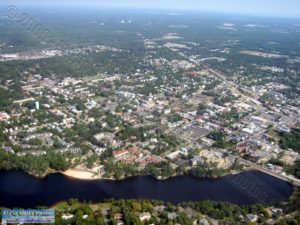 The earliest documented European settlement of the present Lakewood area was by operators of sawmills, from about 1750 forward.  One such sawmill – located at the east end of the present Lake Carasaljo – was known as Three Partners Mill from at least 1789 until at least 1814. From 1815 until 1818, in the same area, Jesse Richards had an iron-smelting operation known as Washington Furnace, using the local bog iron ore.  The ironworks were revived in 1833 by Joseph W. Brick, who named the business Bergen Iron Works, which also became the name of the accompanying town.  In 1865, the town was renamed Bricksburg in 1865, and in 1880 it was renamed Lakewood and became a fashionable winter resort.

Lakewood’s developers thought that “Bricksburg” didn’t capture their vision for the community, and the names “Brightwood” and “Lakewood” were proposed. After reaching out to area residents, “Lakewood” was chosen, and the United States Postal Service approved the name in March 1880.  The name “Lakewood” was intended to focus on the location near lakes and pine forests.

For a quick search of the Lakewood area, click the button:

There are many transportation options for commuters in Lakewood including mass transit, express highways, carpool, and bike paths. Workers commuting to and from Lakewood can travel along the W light rail line, a part of the metro area’s entire transportation network. network.

Major county routes that pass through are CR 526, CR 528 and CR 547. The state and U.S. routes that pass through are Route 70, Route 88 and US Route 9. The Garden State Parkway passes through the eastern part of the municipality , connecting Toms River Township in the south to Brick Township in the north[133] with one major interchange serving Lakewood at exit 89.  Drivers can access Route 70 from exit 89, after exit 88 was permanently closed in November 2014.

The Lakewood Bus Terminal is a regional transit hub. NJ Transit provides bus service on the 137 and 139 routes to and from the Port Authority Bus Terminal in Midtown Manhattan, to Philadelphia on the 317 route, to Newark on the 67 and to Atlantic City on the 559.

The Lakewood Shuttle is a bus with two routes: one in town, and one in Industrial Park.